Marijuana Strain
Qrazy Train is a TGA Dna creation whose crazy name refers to the intricate dna in this Trainwreck, Trinity, Purple Urkle and Space Queen mix. Its versatility comes out in the strain's unique taste profile that includes spice and fruit flavors. These plants typically have deep amber-toned hairs and then some purple appearance. A true hybrid, this train will have you feeling mellow and alert.

When smoked or converted into an edible form, the flavor of the Qrazy Train strain is best described as Earthy, Sweet, and Citrus.

Not all Qrazy Train Seeds are made equal, and the genetics can depend heavily on the breeder. Below you can find a list of available breeders of Qrazy Train seeds to help identify which is the best for you. 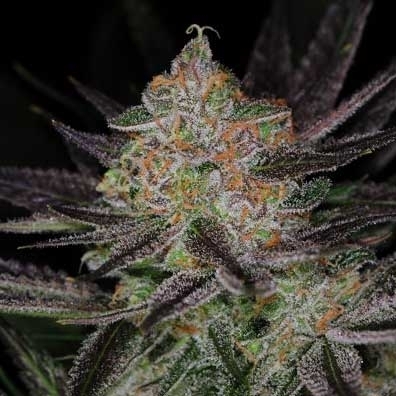 How to Breed Qrazy Train Seeds

Purple Urkle's history is as detailed as its taste profile palate. A Cali..

Ancestry and DNA - Children of the Qrazy Train Strain

Below you can find a list of strains which were bred from Qrazy Train in an attempt to leverge it's medicinal properties and growing attributes.

Lazy Train is a rare predominantly indica hybrid of Qrazy Train and Laven..

There are no questions about smoking Qrazy Train marijuana. Ask one?

There are no questions about smoking the Qrazy Train strain. Ask one?

There are no pictures of the Qrazy Train marijuana strain. Share one?