Marijuana Strain
White Rhino is a hybrid of White Widow and a unknown North American indica strain, building a leafy and stout plant. The nuggets give off a powerful and heady high. The flowers parentage hails from Afghanistan, Brazil, and India. White Rhino is one of the biggest types of cannabis for therapeutic use since it has such a high THC content.

When smoked or converted into an edible form, the flavor of the White Rhino strain is best described as Woody, Earthy, and Pungent.

Not all White Rhino Seeds are made equal, and the genetics can depend heavily on the breeder. Below you can find a list of available breeders of White Rhino seeds to help identify which is the best for you. 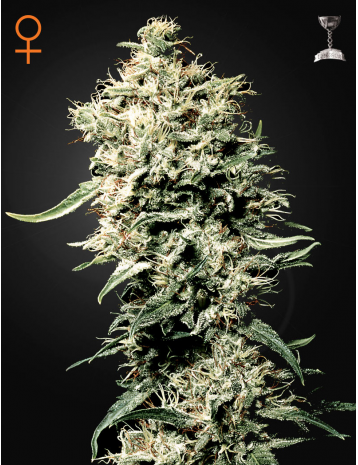 How to Breed White Rhino Seeds

Ancestry and DNA - Children of the White Rhino Strain

Below you can find a list of strains which were bred from White Rhino in an attempt to leverge it's medicinal properties and growing attributes.

Cream Caramel, named soon after its sweet caramel odor, is a 90% indica c..

Blue Rhino is a powerful cross of Blueberry and White Rhino that incorpor..

There are no questions about smoking White Rhino marijuana. Ask one?

There are no questions about smoking the White Rhino strain. Ask one?

There are no pictures of the White Rhino marijuana strain. Share one?